http://recipeshoebox.blogspot.com/2011/07/national-cheesecake-day-recipe-round-up.htmlTwo friends had a birthday party last Saturday where everyone brought along a curry. I know the host of the party isn’t much of a baker, so I asked if I could bring a dessert along instead (I love desserts and knew there would be more curry there than we could possibly eat!).

I was going to make a Malteser cheesecake, after I couldn’t find a Malteser cake recipe that I know is in one of my magazines (I must find a better way to index the recipes in my magazines!). When I told my husband what I was going to make, he said “Yuck, I hate maltesers” (the things you find out after you’ve been married 7 years!), and asked me to make a Cherry Ripe one instead, so I found this recipe from Australian Woman’s Day.

Now, this is only the third cheesecake I’ve made in my life. The first one (when I first moved out of home) was a disaster as I didn’t soften the cream cheese and it was lumpy. I don’t know why, but I decided I needed to make a cheesecake. I know you shouldn’t try new recipes at dinner parties, but I can’t help myself.

The Process
The recipe was easy enough to follow, but with a few comments: 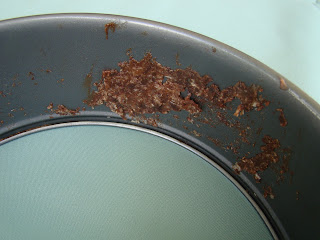 Review
How easy was the recipe to make?
It was a straightforward recipe, with only a few steps, but did dirty a few bowls and saucepans.

Did the end result look like the picture?
Yes, here it is: 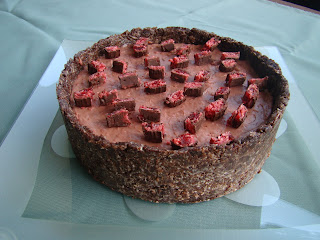 How did it taste?
Yummy! It all got wolfed down at the party (and the beaters got well-licked when it was made too).

Would I make it again? Would I make any changes?
Definitely, it’s a great cafe-style special treat dessert. Next time, I’d only make half the amount of base (or maybe even a bit less) and only line the bottom of the pan. Although the base did taste nice, I’m not really a fan and it was a bit much for me.

What’s your favourite cheesecake recipe? What dessert would you take to a dinner party?