With all the recipes from the Saturday Lunch Feast, I haven’t managed any craft posts this week. I don’t have any new projects to show just yet, but I’ll give you a status on the projects in various states of progress in my sewing and craft room. 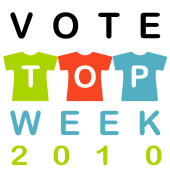 Firstly, sadly, I didn’t make the finals of Spring Top Week over at Made by Rae, but I’ve been so inspired with the finalists (and well, all the entries, really!). I’ve got a lot of sewing practice ahead of me before next year’s competition! There has been a daily vote each weekday this week, with the winners of the daily vote up for a final vote over the weekend. Check it out (also check out the Flickr pool for more inspiration)!

As mentioned previously, I’m participating in the Weekender Tote Sew-Along over at Sew Spoiled. We were cutting this week, and here are my efforts: 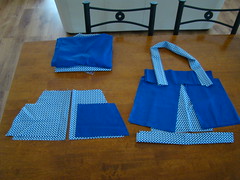 It’s nice to have an idea now of how the whole bag is going to look, with all the pieces cut. It took me a while to get my head around what all the pieces meant, but laying them out like this really helped! It’s not too late to join in, so head over to Sew Spoiled and get sewing!

I’ve also being doing some prep work for Kids Clothes Week which is NEXT WEEK at Elsie Marley. The challenge is to spend one hour every day for a week sewing clothing for your kids’ new season wardrobe (so it’s winter wardrobe for us!). I’ve started cutting out the material for a couple of long-sleeve 90 minute tops from thrifted polo shirts, and have drawn up a pattern for some flat-front pants for my little man. I’ve also bought some fleece to make a couple of pairs of tracksuit pants. I want to spend the week at the sewing machine, rather than at the cutting table, so I can see some completed projects at the end of the week! Why don’t you come along for the ride if you’ve got some kids clothes projects needing attention?

The curtains for Number 2’s room have been a project languishing in the too-hard basket for quite a while, and I’ve decided I need to get it done by the end of the month, so I can start my next big project (a quilt and decorations for Number 1’s room for when he moves into a big boy bed). I’ve pulled out the material again this week and got everything cut, so hopefully I’ll get a good run at the sewing machine this weekend, and see how far I get!

Masterchef Australia has also returned to TV in the last few weeks. I love this show, but with it being on 6 nights a week, I’m spending way too much time in front of the TV. I’ve decided that I should use this time to make some crochet toys, with a few probably for presents for the babies that have arrived or are due to arrive for several of our friends. I’m starting with Pablo Panda from the Lion Brand website, which will hopefully look like this:

Once again, I didn’t think I did much this week, but when I write it out like this… I have got a bit done! Happy crafting!