For each month until my bub arrives (October), I’m having a nesting theme (see here for more details). June’s theme is Bedrooms.

After making triple-pinch pleat curtains for the two kid’s rooms, I wanted to make something a little different for the three remaining bedrooms (yes, we have a 5-bedroom house!), particularly as they have picturesque casement windows. I looked at Austrian blinds, but thought they would be a bit too frilly and girly for my husband’s liking (I concede, it’s his house too!). Eventually, I stumbled upon this tutorial for London Blinds at Alternative Windows. They draw upwards, like roman or Austrian blinds, and so show-off the windows nicely, but have a simple box pleat when down, so not too fancy or frilly.

The first room I made them for were the downstairs guest bedroom, as there were no curtains or blinds when we bought the house, and the window looks onto the street and isn’t all frosted. I didn’t think guests would appreciate the lack of privacy, and both are families live interstate, so we get visitors frequently!

The fabric I bought had a thermal coating on the back, so I decided not to add a lining to these curtains. The tutorial doesn’t state what sized window the measurements are suitable for, so I made a judgment that I would have the centre of the pleats at 45cm (18″) from the edges of the blind, leaving a 60cm (24″) middle section between the pleats, which I thought would fit nicely with the three window panels of our windows. Here is the end result: 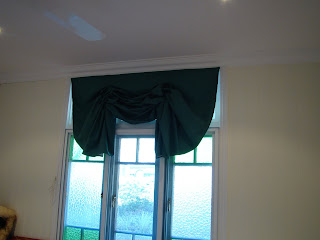 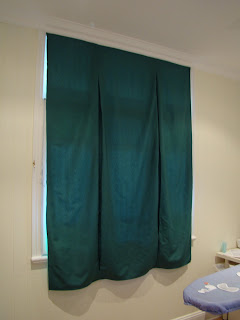 The blinds seem to stick out a bit when in the down position, letting light in the side, so I sewed the box pleat flat at the bottom, which helped. I wasn’t entirely happy with the longish ends of the curtains when they were pulled up, compared to the sag of the middle section, so decided that the centre of the pleats would be 30cm (12″) from the edge of the blind for the next blinds I made (this time for the master bedroom, and fully-lined): 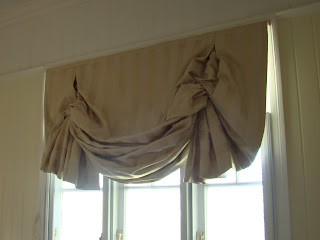 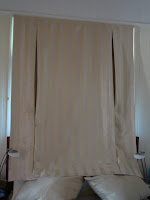 I also made some simple box pleat curtains for the small windows on the double doors that lead to our balcony and our ensuite (our ensuite doors have clear glass – not fantastic for the person trying to sleep when the other has to do a middle-of-the-night bathroom trip!), which I attached to the doors with the same velcro as the blinds: 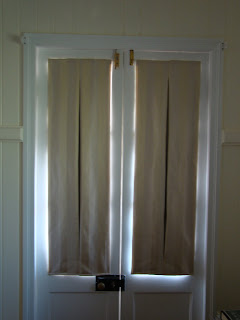 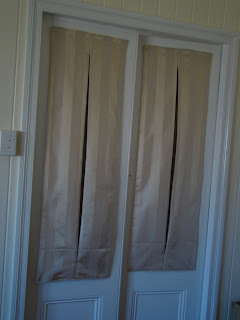 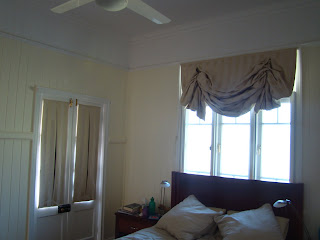 The London blinds for the 5th bedroom/study are still in progress – hopefully I’ll finish them off this weekend.

These blinds felt much easier to make than the curtains. Once again, just a lot of straight sewing, suitable for a beginner, but still a reasonable amount of fabric to wrestle with for our windows. I haven’t finished off the cords for drawing the blinds – I can’t find anything I like to put on the end of the cords. Any suggestions?