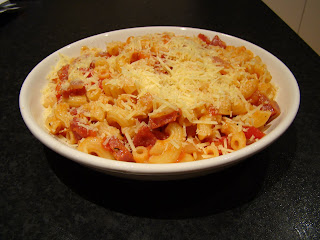 Tuesday nights are Pasta Nights in our house (well, actually, the menu plan theme is “meals that taste good re-heated” as my husband works late on Tuesday nights. I feel bad when he gets home tired if I feed him meat and veg that doesn’t re-heat well). I’m running down meat stocks in my freezer, so I don’t have any mince, and I’ve had my pesto pasta a few too many times lately (I didn’t think ti was possible), so I rummaged around in the pantry, and threw together this pasta.

Procedure
1.  Heat vegetable oil in a frying pan. Add onion and cook for 3-4 minutes, until soft.
2.  Add tinned tomatoes, salami and capsicum. Bring to the boil and simmer for approximately 30 minutes, until capsicum/pepper is soft. Season to taste – I just added a bit of pepper. I thought the salami provided enough saltiness.
3.  Cook pasta as per packet instructions.
4.  Mix together the cooked pasta and the sauce, and serve into bowls. Sprinkle with parmesan cheese. 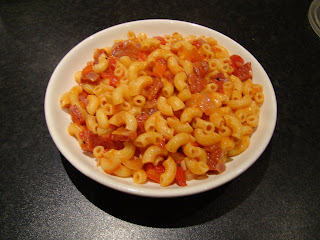 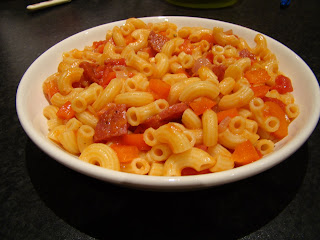 Funnily enough, my husband said “we haven’t had this in a while” when he pulled it out of the microwave when he got home. I said “That’s because I’ve never cooked it before”. Turns out, from the look of it, he thought it was my Creamy Tomato Pasta. I must admit, they are very similar!
❮❮ Previous Post
Next Post ❯ ❯