My brother recently bought his first house, and since I live across the country, I thought it would be nice to send a house-warming present. I really have no idea what he needs as when I go home, I normally catch up with him at my parents’ place. He previously shared a house with a mate, so I have no idea what belonged to him and what was the mate’s. I also wanted the present to be a surprise, so I couldn’t just ask him.

When it comes to Christmas and birthday presents, I normally go the easy option and buy Star Wars merchandise, but I’m on this crafty, homemade kick, and thought I should be somewhat sensible with the present for a change (he is in his mid-thirties and now has a mortgage!). I decided you can never have enough pot holders, but that I could still go with a Star Wars theme. Here is the end result: 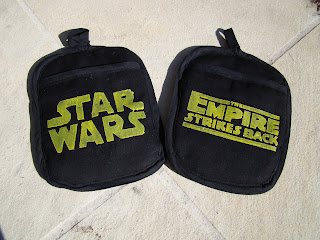 I started by cutting the pieces from black quilters cotton, and the padding is actually an old towel cut up (a thrifty tip from my Mum). I used two layers of towel for the gripping side of the pot holder, and another layer for the side that slips over your hand, to protect you if you’re a bit uncoordinated like me and occasionally bump the top of your hand on the next shelf in the oven. It gives it a nice padded feel as well.

I searched for the Star Wars logo using Google image search (I love Google image search!), and printed it out to make a freezer paper (or in my case, wrapper from printer paper) stencil. I was originally just going to make two Star Wars ones. For some insane reason, I decided since The Empire Strikes Back is my brother’s favourite Star Wars movie, I’d make one with that logo. I drove myself insane cutting out the stencil for that one (is this where I need a Cricut???). 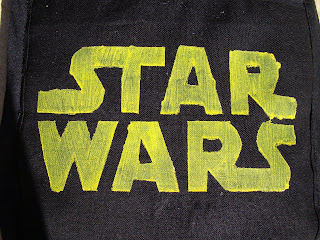 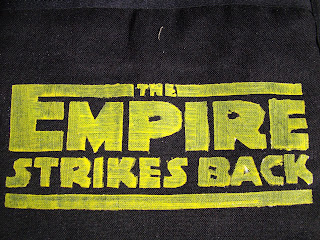 Anyway, I eventually sorted out the stencilling – I was going to use white fabric paint, but I didn’t have any and I wasn’t going to the craft store, so used yellow instead. I then sewed up the pieces, using store-bought bias tape: 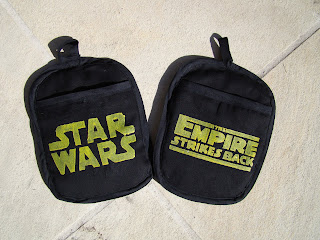 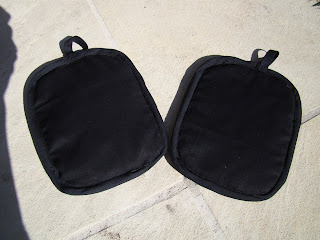 I posted off the present with a copy of my Mum’s Tuna Mornay recipe. My brother is always complaining that she gave me a copy, but never gave it to him! My brother is pleased that he no longer has to try to “use the force” to get things out of the oven!