It’s Kids Clothes Week over at  Elsie Marley this week. The challenge is to spend an hour each day for a week making clothes for the kids in your life. There are over 300 participants to keep you motivated. Check out the Flickr pool here, and my Day 0 and 1 achievements  here.

Another day, another raglan T-shirt for my son: 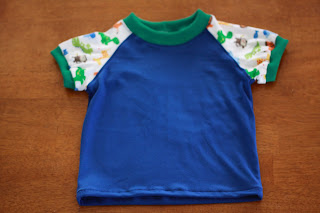 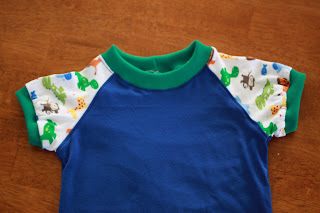 I think I’m getting better at sewing with knits, although it’s not very neat in a few places as I was rushing. (My husband came home from work at lunchtime with a serious case of Manflu, so I was trying to finish quickly so the overlocker/serger wouldn’t disturb his sleep.)

I forgot to mention that I used a twin sewing needle for the hem of the grey T-shirt I made yesterday. It’s the first time I’ve used a twin needle, and there’s nothing about it in the manual for my sewing machine (even though the Janome website lists twin sewing needles as available accessories for my machine – Memory Craft 3500, if anyone’s interested…). I decided to wing it based on general information about sewing with twin needles on the internet, so I rigged up a second spool holder on top of machine: 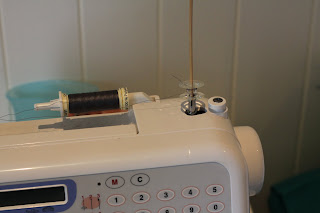 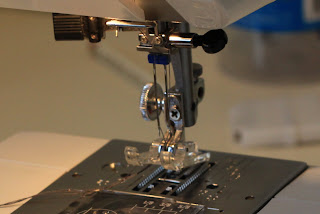 (Yes, that is a bamboo skewer stuck in my bobbin winder!)

I then threaded the machine with both threads as per normal, just splitting them at the thread guides on each side just above the needle. My googled understanding is that you select a normal straight-stitch, and because one needle is a little bit longer than the other, both needles will pick up the one bobbin thread. My first test strip was pulling the fabric together between the two rows of stitches, so I reduced the tension, and that helped. 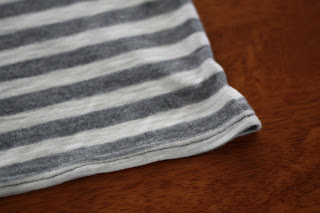 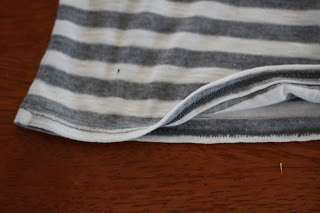 I didn’t really stretch the fabric when I was sewing my test swatches, but I did a bit when I was sewing the hem of my T-shirt, so the stitching on the back looks a bit bunched up. The hem has a lot of stretch in it though, so it should survive being worn by a toddler! The hem looks a bit snazzier than the usual single row of stitching (or crooked two rows of stitching), but I don’t think it’s that much nicer to justify the bother of winding another bobbin and changing the needle on a regular basis (yes, I’m a bit lazy with my finishing off!). I’ll save this for special occasion sewing. It is nice to have another tool in my sewing arsenal though!