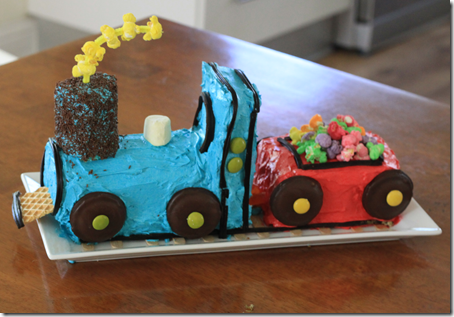 Our little man turned 2 last month. We didn’t have a party, for a number of reasons, but I was still determined to make him a cool cake.  When my Mother-In-Law visited us last year, she bought an Australian Women’s Weekly magazine that had a little cookbook on the front with a selection of recipes from various AWW cookbooks. It included a Choo Choo Train from the Kids’ Party Cakes cookbook. I remember spending hours flicking through this cookbook as a kid, picking out my perfect birthday cake (which I never got …). The Choo Choo Train cake was just perfect for my transport-obsessed boy. 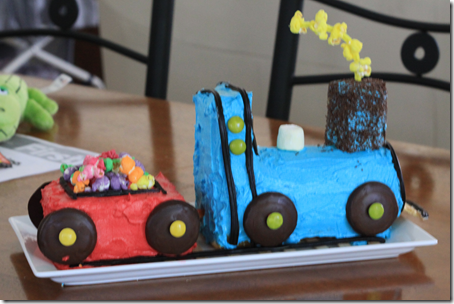 The original had 4 wagons, but this cake only needed to serve 3 people, so I only made one. It was made from two log cakes (I copped out and used a packet) and a store-bought jam roll for the engine. The “steam” is popcorn threaded on a pipe cleaner (chenille stick).

Putting it together and decorating it took longer than I planned, although the day got a bit mixed up with a not as much napping as expected. I had to keep the inner dialogue going that I was making this for a 2 year old, and it didn’t have to be perfect. There were stray chocolate sprinkles, the icing was nowhere near smooth, the liquorice strips went on a bit wonky… 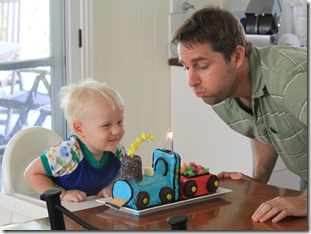 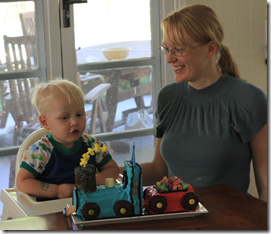 …but when my son came down the stairs and said “Oh WOW! Choo Choo Train, pretty”, it was all forgotten.

I’m a little worried I’ve set the bar too high too early with birthday cakes. I’ve now purchased the full cookbook, and I better start studying for the years to come!