It’s been a while since I’ve posted and I can’t really explain why. The last few weeks have been draining as the Little Man hasn’t been sleeping well. Things finally felt like they were getting back on track, and then he had a really bad night last night. He’s got a bit of a temperature and is miserable and snuggly today. I’ve also found blogging a little insignificant and frivolous amidst the natural disasters that have occurred in our region.

The content of the blog has been a reasonable reflection of my life: not much cleaning, a little bit of cooking and as much crafting as I can fit in around hanging out with the kids. I’ve got lots of projects to share with you, but lose motivation whenever I sit in front of the computer. One-handed typing whilst feeding Little Miss is hard work, and getting to the computer at other times is a challenge.

My word for the year was Routine, and I’ve got the kids in a fairly steady routine (as dictated by them, not me!), but I’m struggling to find my own routine. I think it’s my all-or-nothing perfectionist personality. I put together a massive list of all the things I want to get done and/or put together a schedule of what I want to do, and then I either get completely discouraged and do nothing, or I think I even rebel against my own lists telling me what to do (is that just slightly crazy?). I just feel so behind with not having a routine for 6 months or so, since Little Miss arrived.

But enough gloom! This week, I was motivated by Project: Simplify at Simple Mom, where the hot spot was paper clutter. Filing and doing the finances has been such a low priority that it was out of control. I’ve got a reasonable system for managing paper (I’ll blog about that one day), but the system is useless if you don’t actually use it! So this week, I’ve been doing minimum maintenance on my other household chores and hitting the paperwork hard. It’s taken much less time than I expected and I feel so much more positive as one little part of the household is back under control. I’ll put together some photos and more details about my efforts tomorrow.

And I thought I’d add a little glimpse of my motherhood, to link up to Project 52 at Simply Modern Mom.

Here’s a typical day in our playroom. Little Miss sweetly lying on the floor, watching what’s going on and Little Man being a cyclonic cheeky monkey. 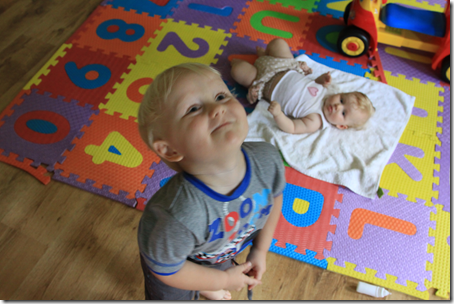 I’ve decided that the best way to get back into a routine is by adding to my day little-by-little, one week at a time. My goal for next week is finding a better system to get the laundry done. I’ll let you know how I go!