As I mentioned last week, it’s Kids Clothes Week at  Elsie Marley. The challenge is to spend an hour a day for the week making clothes for your kids. Time to dust of those projects building up to make sure your children aren’t running around in the nude in the coming season (This would be particularly bad here in Australia, since we’re heading into winter!).

Day 1
I managed to spend a massive two and a half hours at the sewing machine, thanks to a huge nap (and a small nap) by my little man (I even managed to clean the bathroom before I started – what a day!). This sounds like I should have made lots of progress, but not as much as I would have liked. I decided to start with a  90 minute top from a thrifted men’s polo shirt, which I cut out last week, and to use my new overlocker (serger) for the first time. Overconfident me thought it would be easy, since I’d had a little bit of success in some trial sewing, but alas, no! It took me more than half an hour to get the machine set up to serge the ribbing. I did get there in the end so I should stop being so hard on myself.

I then had a minor disaster as I somehow managed to sew one sleeve with wrong sides together, instead of right sides together. I’d serged it, to make matters worse. Luckily, I’ve managed to operate the serger with minimal material cutting so it was recoverable! Out came the seam ripper (or quick unpick, as my Mum used to call it), and the offending seam was removed. Quick tip: don’t unpick a serged seam over the top of other pattern pieces – it makes really annoying trying to collect all the thread-bits (what was I thinking???).

No more major disasters after that, and here is the before and after: 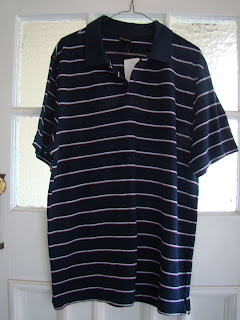 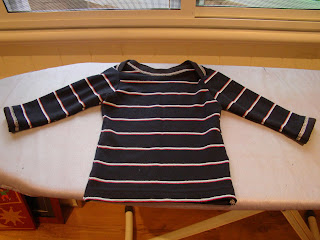 Day 2
Another day, another 90 minute shirt from a thrifted men’s polo shirt which, once again, I’d cut out in preparation last week. One hour of sewing, one completed top, and only one minor disaster – the cuffs somehow got completely out of whack on one sleeve, and out came the seam ripper again! Not enough pins was my conclusion! Here is the before and after: 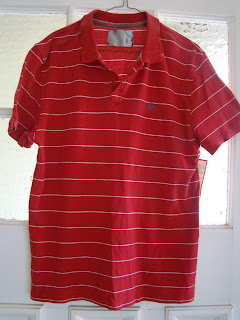 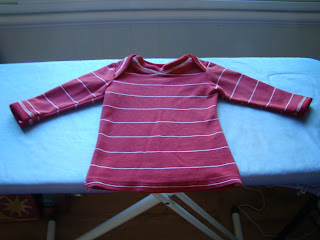 I haven’t tried getting my little man to model – that will be a challenge for later in the week!