Here’s the tutorial I shared at the Train to Crazy for the Handmade Dress-Up Series: 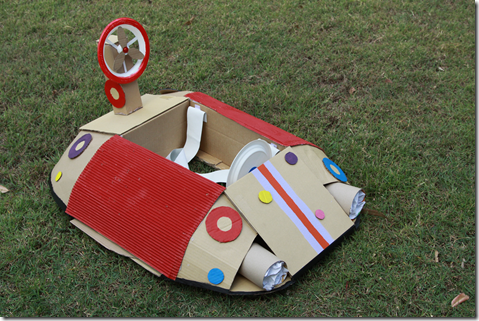 The Giggle Mobile is the amazing car/hovercraft/plane/submarine driven by Jimmy Giggle and Hoot the Owl (the hosts of ABC2 – the kids’ TV channel here in Australia). For those with blank looks, here’s the song:

Not only is my son obsessed with Giggle and Hoot, he loves all things transport. With all the cardboard boxes I’ve been collecting (thank you, IKEA and internet shopping), I thought it was time to create a fun cardboard Giggle-mobile costume.

Note: Originally, this was going to be a simple cardboard box car, but the perfectionist in me took over, and it somehow became a cardboard masterpiece. I really hope it lasts more than a few days before my son destroys it!


I started with a cardboard box that my toddler could stand in, but not much bigger than that. It ended up being 10.5” wide, 14” long and 6” deep. I also used a large flat-pack box. 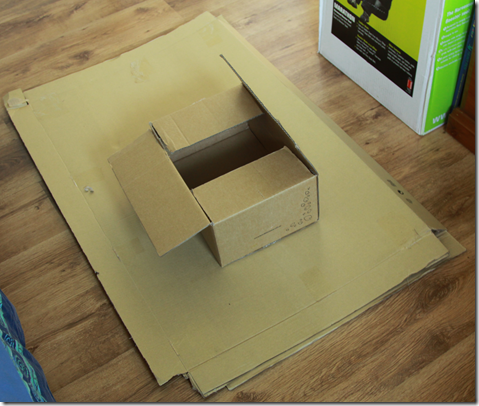 I traced around the cardboard box and then cut a rectangle from the flat-pack box that was 8.5” longer and 7.5” wider than the small cardboard box.

I hot glued the smaller box onto the larger piece of cardboard and cut out a hole in the base. 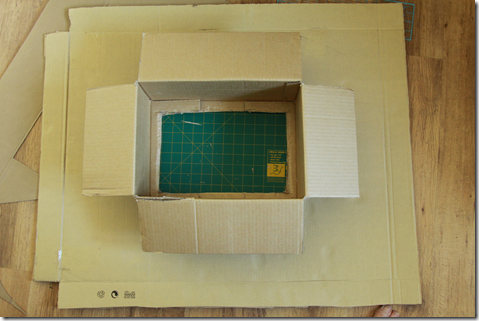 I then cut out the following pieces for the car panels: 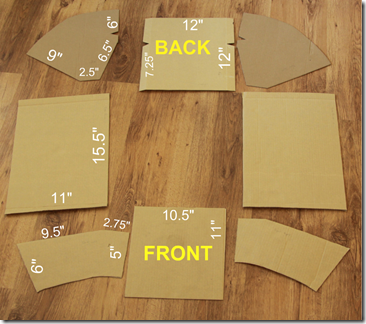 The pieces on the right are a mirror image of those on the left. I worked out the shapes of these pieces by bending and folding the cardboard pieces around the box. They weren’t worked out precisely and I ended up trimming piece as I glued the car together.

I peeled off the top layer of cardboard from the two side panels to expose the corrugations underneath: 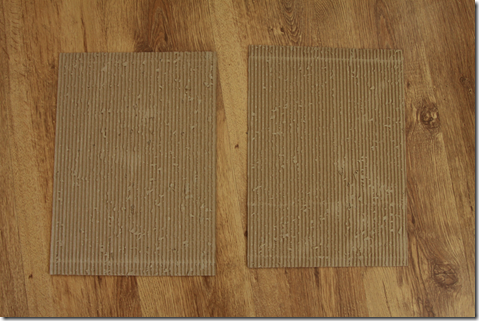 I also cut two wings that were 12” long and 8” wide (so they fit inside the side panels), and cut some extra thin strips of cardboard 12” long. 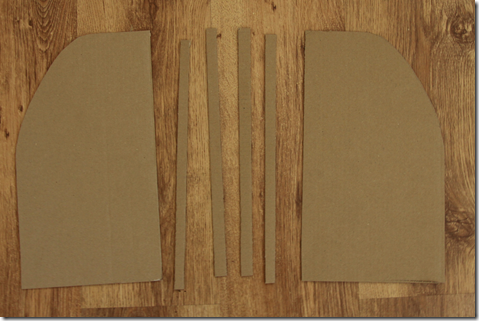 I hot-glued the thin strips to the edge of the wings. This is to stop the wings from pulling all the way out. 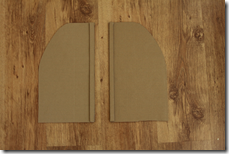 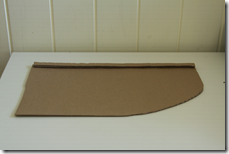 Then it was time to hot-glue all the panels into place, starting at the back. I bent and trimmed the cardboard as needed as I went: 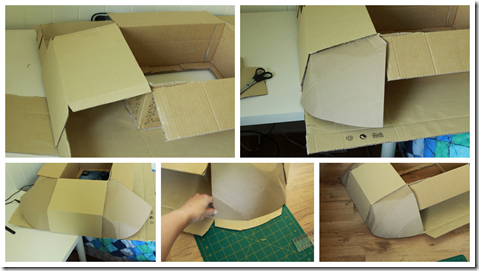 And then onto the front: 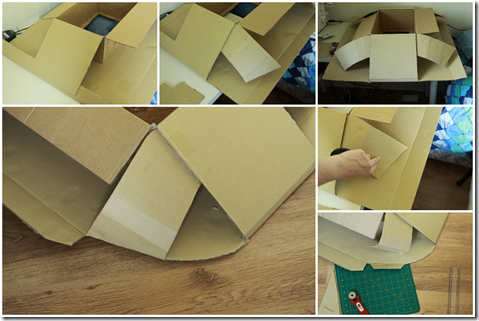 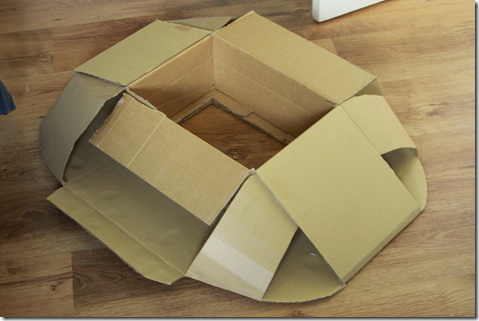 I cut a small slit in the flap on the sides to insert the wings: 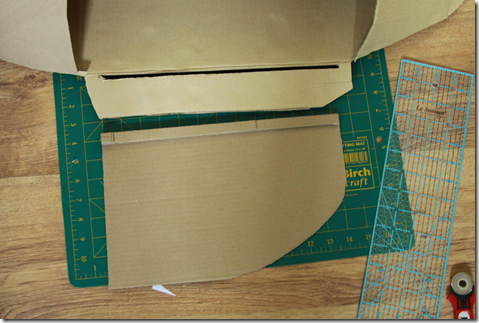 Then inserted the wing and added some small strips of cardboard to guide the wing in and out. I also stuck small pieces of cardboard either side of the slit to reinforce it. 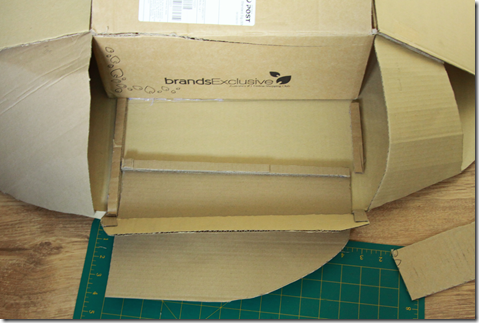 I painted the corrugated side of the side panels red, and glued them into position: 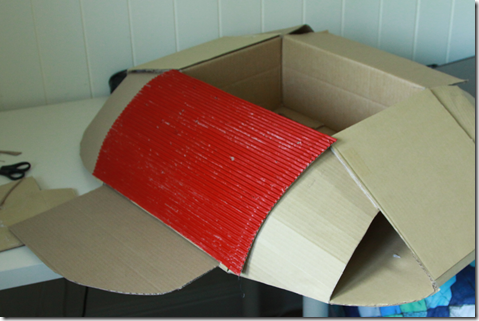 I then used a split pin, plastic plate and plastic bottle top to create a steering wheel: 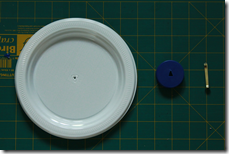 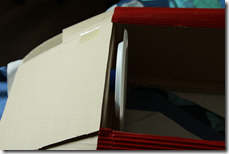 I used another plastic plate, and tall, skinny cardboard box, a piece of cardboard cut like a propeller and another bottle top to make the hovercraft part on the back: 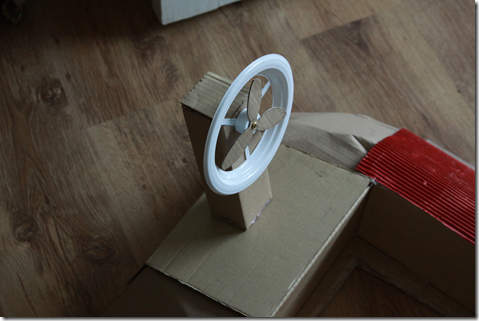 The plastic plate is glued to the cardboard box, and the cardboard propeller spins. So now you have completed the shell for your Giggle-mobile: 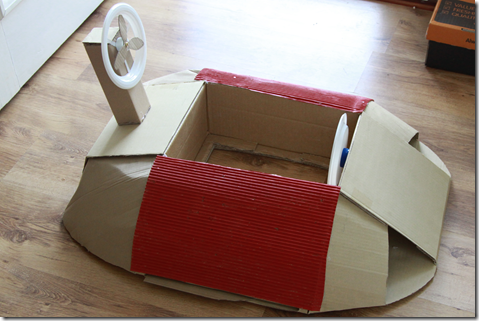 I cut two rectangles from a cereal box, and glued them into a cylinder: 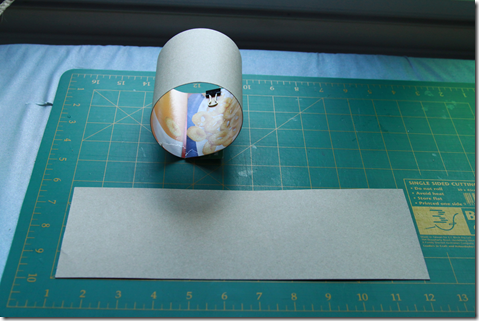 I filled one end with paper and glued it into position for the headlights. Oops, no photo here… you’ll have to wait until the finished product to see!

The Giggle-mobile is decorated with large buttons. My buttons were created from painted cardboard circles. 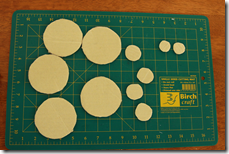 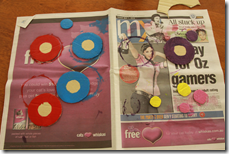 At this point, I was thinking I’d spent enough time on this masterpiece, so didn’t bother drawing on the “threads” for the buttons!

The buttons were glued into position and a few stripes were painted on. Finally, I used two strips of fabric (webbing or ribbon would also work), and used stick and sew Velcro to attach it to the box for the straps for wearing the Giggle-mobile. 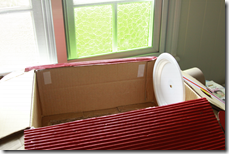 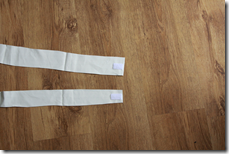 And finally, the Giggle-mobile was complete, as a car: 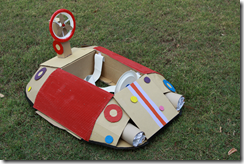 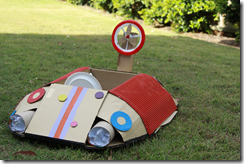 Or as a plane: 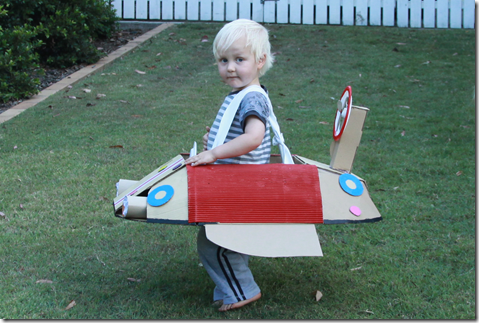 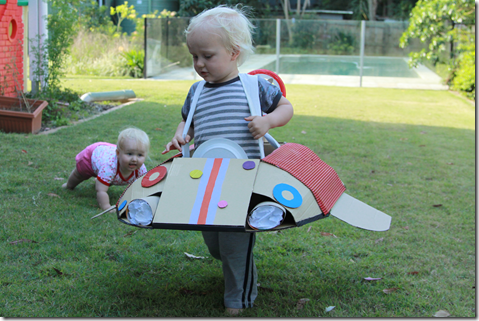 My son loves pulling the wings in and out: 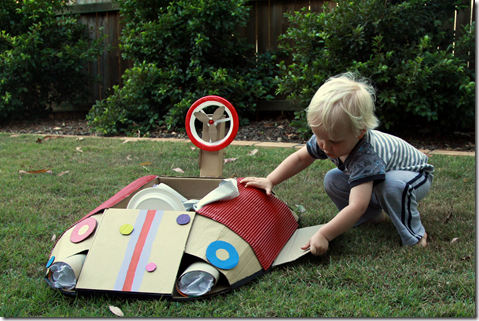 Even if you’re not a Giggle and Hoot fan, you can use the same steps to create your own car/plane/UFO. I’d love to see what you make. 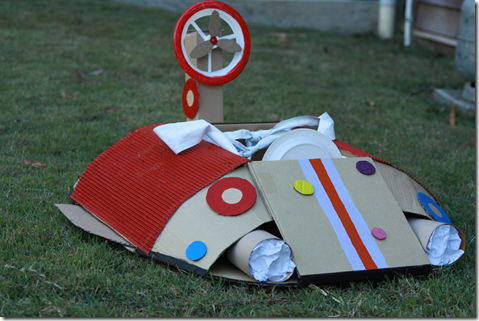 After I gave it to my son, the first time he saw the Gigglemobile on TV he said “Look Mum, it’s another Giggle mobile!” and dragged his over to the TV. So cute!

Are any of you guys Giggle and Hoot fans, or is it just me?