My little girl turned 4 on the weekend, and as the Frozen obsession continues, the party had to be Frozen-inspired. Here’s an overview of what we did at the party. I’ll provide more details and tutorials for the different projects in the next week or two. 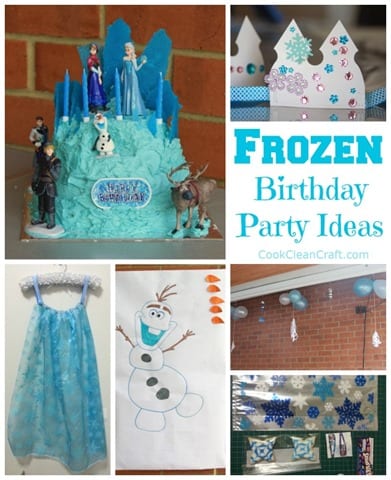 The decorations were fairly simple – blue and white balloons, paper snowflakes (from my Winter Wonderland tutorial, which is still up after almost 2 years!) and foil snowflakes (from eBay). 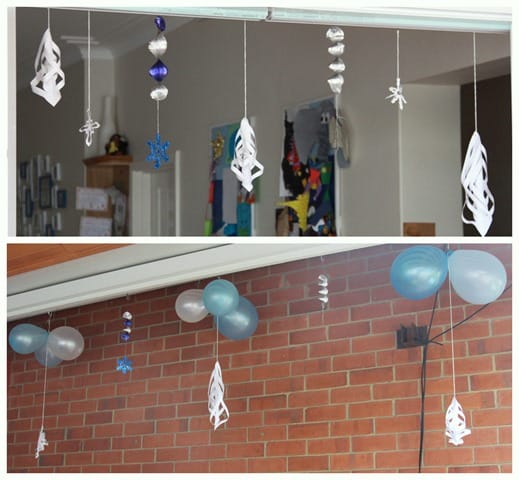 I made my daughter an Elsa party dress for the occasion (all the details blogged here), and an Anna cape for myself (which was a rush job the night before the party, and not very polished! Good enough to please the 4yo crowd!). 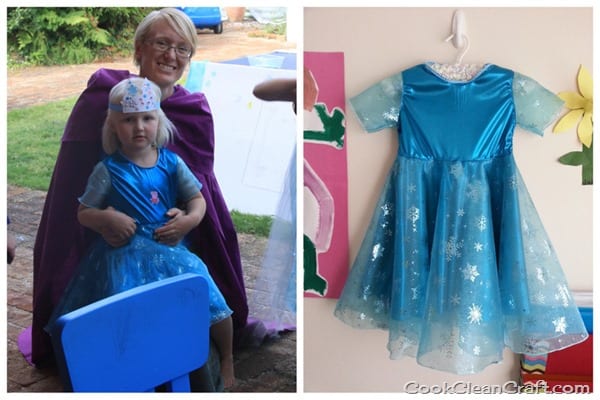 When the girls arrived, they put on an Elsa cape made from snowflake organza (tutorial is here), so we had a bunch of little Elsas running around. The cape was theirs to keep, part of the “loot bag”. I thought it was a fun alternative to a bag of lollies (although it wasn’t the only thing they got). 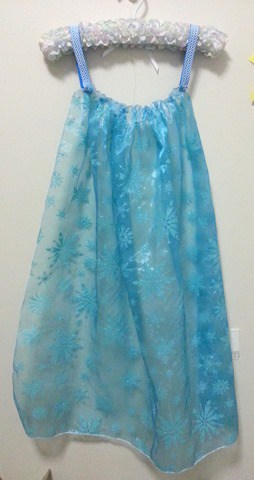 The first activity for the party was making tiaras. I cut crowns into sections for the tiaras, and added blue printed fold-over elastic so the kids could wear them. The kids decorated the tiaras with stick on gems, from the scrap-booking section of my local craft store. I also cut out snowflakes from thin pale blue cardboard (using the in-built templates of my Brother Scan’n’Cut). The markers were out as well, but the kids were more interested in the gems. I shared more details at And Sew We Craft. 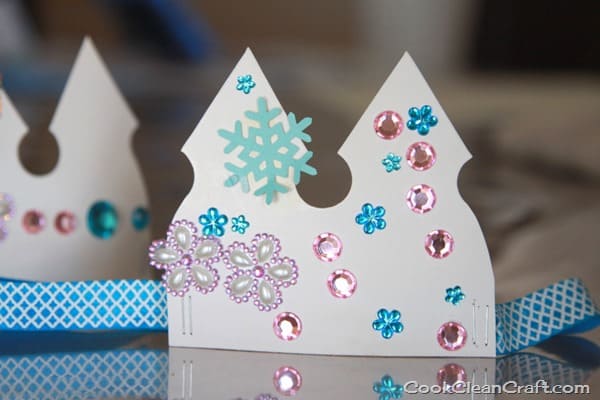 After the tiaras were made, the kids decorated the “ice palace”. I was lucky to get a package in a large cardboard box the week before the party. There were more snowflakes and markers to use. The kids (and Uncle Richie) had fun drawing all sorts of things. I draped leftover snowflake over the ends to finish off the palace. 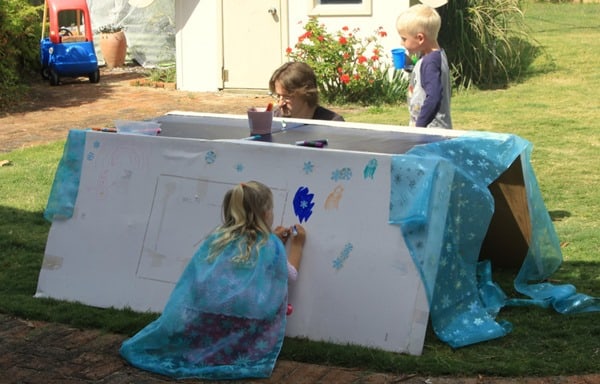 I thought the kids might want to play in the ice palace, but most of them got distracted by dolls. It did get a bit of use, and is still in use now.

After that, we played Pin the Nose on Olaf. I drew a picture of Olaf, using a Disney Princess magazine as my guide, and then cut out carrot noses. I used airline eye patches – I think the winner may have been able to see at the bottom 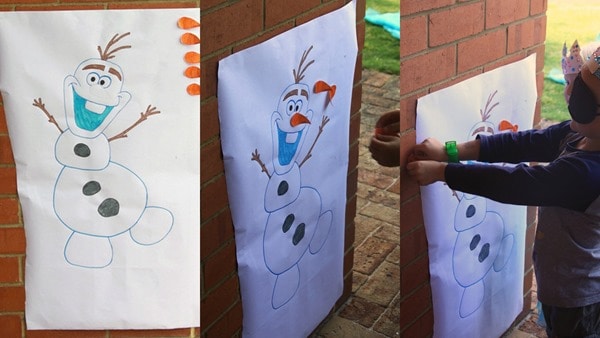 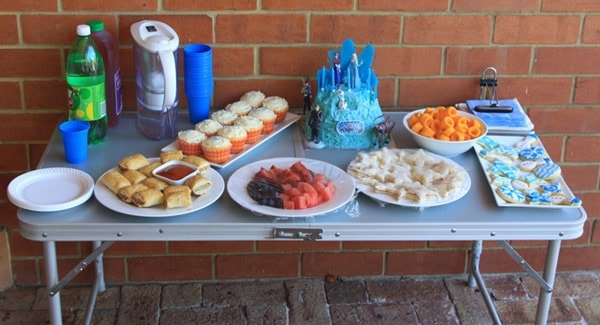 With only 5 kids at the party, I didn’t have to make too much food (and of course, I way over-catered!). Sausage rolls, Cheezels and sandwiches cut into snowflakes for savoury, and cupcakes, snowflake and snowmen cookies and fruit for sweets.

Then it was time for the birthday cake. I put a few photos as I was making it on Facebook and Instagram, and I’ll write another post with all the details soon. I bought figurines from eBay, and then made a toffee ice palace on top of the “North Mountain”. I shared the details and a recipe for the toffee here. I LOVED how it turned out! 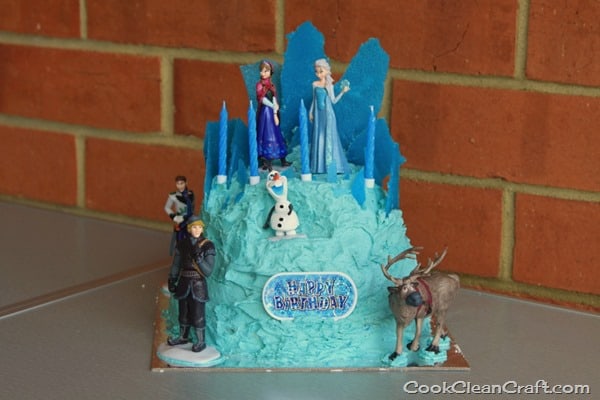 After cake and more free play, it was time to go home. I put Smarties, bubbles, Elsa and Anna hairclips (from eBay) and a couple of sugar cookies in the party bags (also from eBay) for the girls to take home. 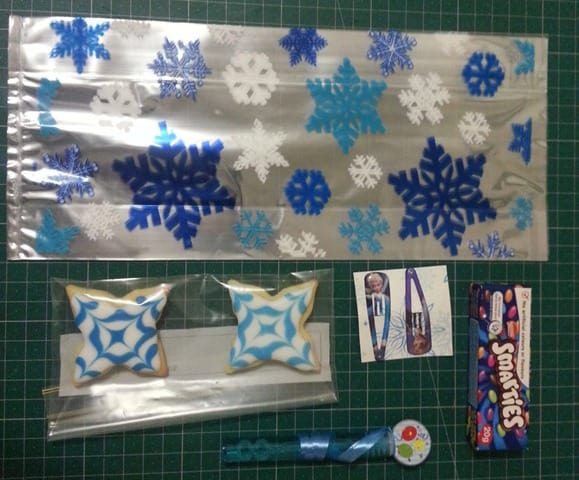 It was a simple Frozen party and the kids had a great time. I’m getting reports that the capes are getting lots of use after the party too.

Come back later this week for details on the cake, dress and more. If you’re looking for more Frozen inspiration, check out 35+ Frozen crafts, or this tutorial for an Elsa costume.