Birthday parties are the most fun thing in the world when you’re 5. When my daughter turned 5, she wanted a My Little Pony party. I love hosting the kids’ birthday parties at home, but that brings added pressure of preparing all the food and games. It’s lucky I love creating fun birthday parties.

Here’s a sneak peek of the Princess Celestia dress and wings I made my daughter. 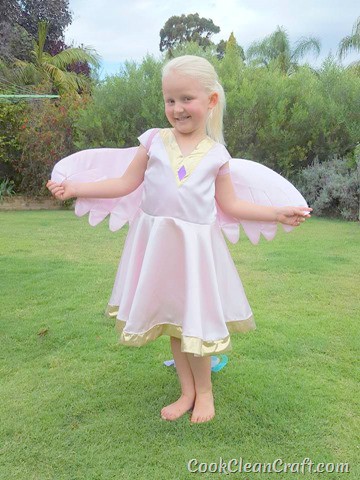 A full tutorial is coming soon! 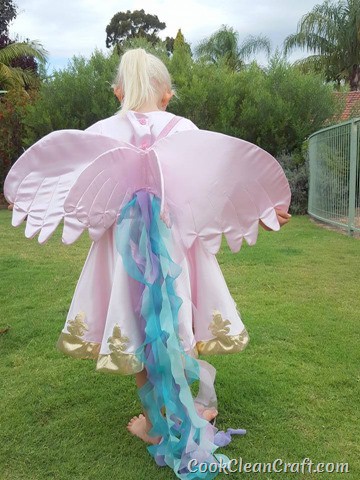 The front door had a sign, welcoming guest to Ponyville: 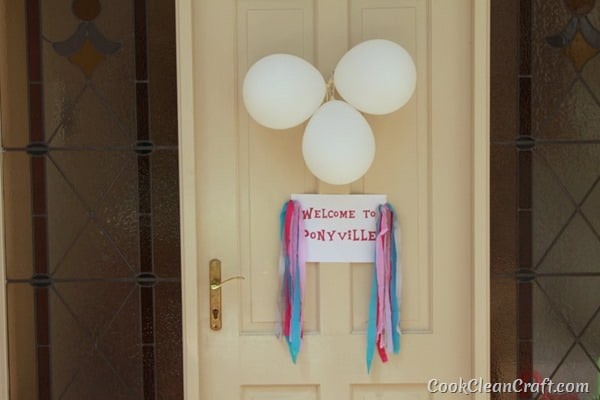 And the door to the backyard had a balloon cloud and rainbow streamers (well, more like Princess Celestia colours!):

The party was scheduled for mid-afternoon, so the food was a small collection of nibbly finger foods (just enough to make sure the kids didn’t eat dinner!). 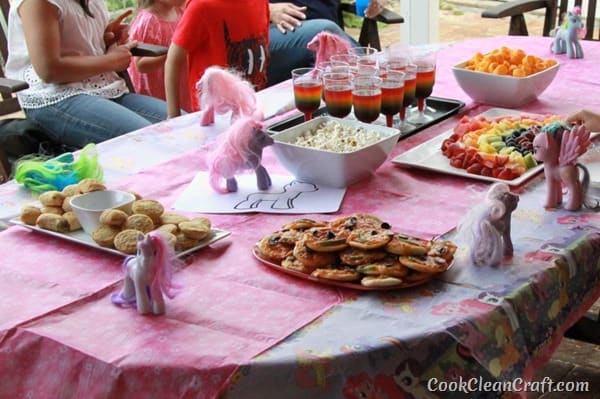 For savoury, we had the obligatory party pies and sausage rolls, plus some plain popcorn (let’s pretend they were clouds!). A friend also brought along some mini-pizzas. 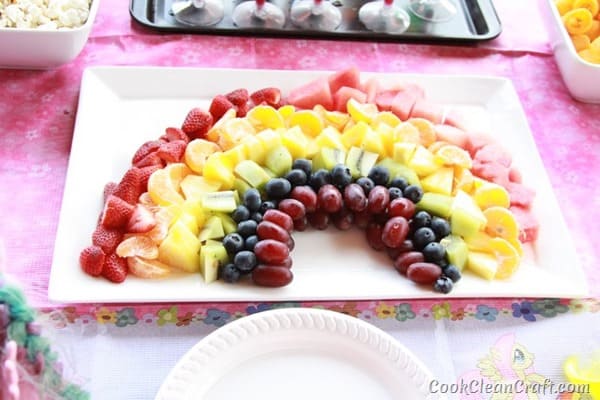 My kids love fruit, and I always like to have some on the table, so cut through the sweetness of the other treat food. 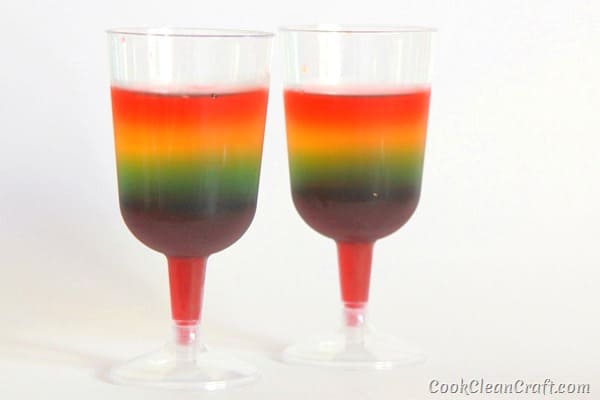 Along the rainbow theme, I also made rainbow jellies – so easy to make, but look spectacular!

I always have to make sugar cookies too. This time, I used a My Little Pony logo cookie cutter, and piped on the logo. I bought this cookie cutter from Etsy (affiliate link) which imprinted the design on the cookie. Then it was just colouring in with royal icing!

To drink, we had water and apple juice, direct from Sweet apple acres of course!

For the birthday cake, I went with a similar idea to last year’s Elsa Ice Palace cake. I bought My Little Pony Figurines from eBay, and made a three-tier cake. I iced it with Pink White Chocolate ganache (which ended up a bit brighter than I’d planned, but my daughter loved it!), and placed the ponies on the cake: 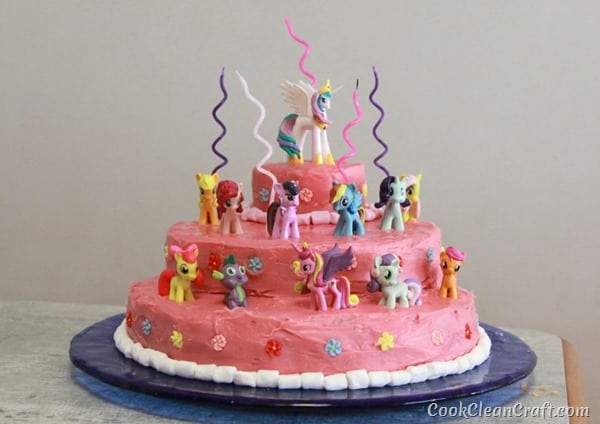 My daughter and I discussed the correct order – of course Princess Celestia went on the top. The next tier had the main pony characters – Applejack, Rarity, Twilight Sparkle, Fluttershy, Pinkie Pie and Rainbow Dash. And the lowest tier had the minor characters – Sweetie Belle, Spike, Princess Cadence, Scootaloo and Apple Bloom. 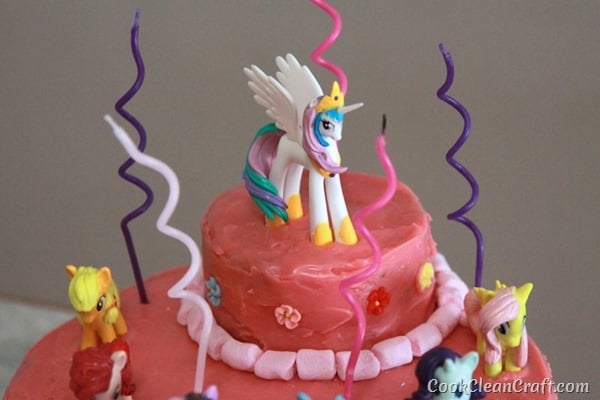 The Princess Celestia one was actually from a My Little Pony magazine and was bigger than the other figurines.

As an added bonus, my daughter loves playing with the figurines, as an extra birthday present.

I like to start parties with a craft activity. Something for the kids to do while waiting for everyone else to arrive. Making something also helps little ones get over their shyness about being somewhere different. 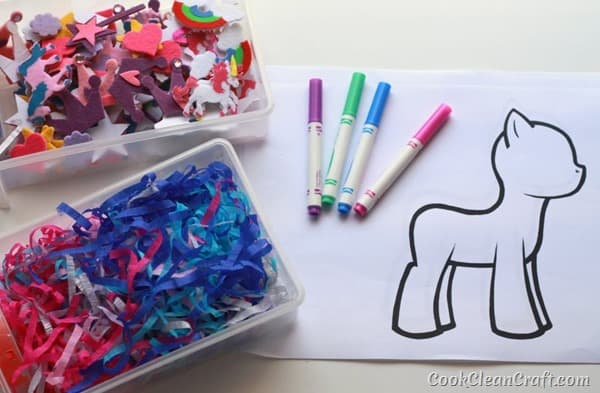 For this party, we had a decorate your own pony station. I printed a pony outline with no mane, tail or cutie mark. I shredded some crepe paper, and put out stickers, glue and markers, and let the kids go to town. Here’s what my two kids made: 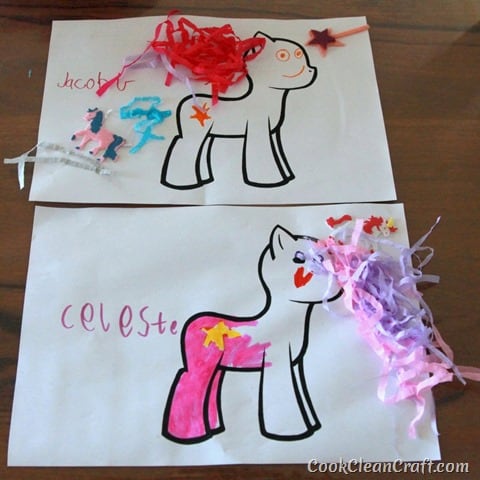 Next up, we played pin the cutie mark on the pony. I cheated for this one and bought the game from the party section of Big W. We had more kids than the number of stickers in the pack, so I scanned the sticker sheet and printed extra on normal paper. I then used Blu-tak on the back for the kids to stick them to the poster. 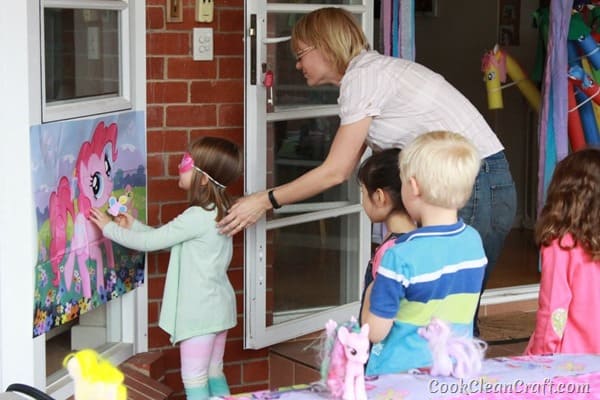 Kids love a treasure hunt. I made Elements of Harmony necklaces (plus the crown for Twilight Sparkles!), and hid them in our backyard. I made two of each one so there would be one each for all the kids. 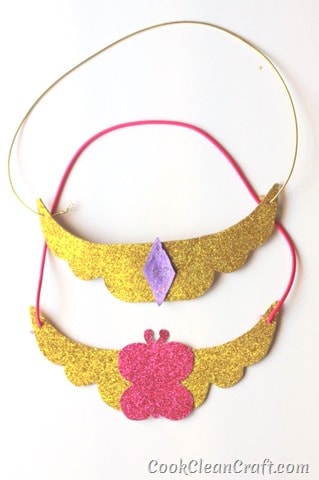 I told the kids they needed to find the Elements of Harmony to defeat Nightmare Moon. So they raced around the backyard looking for them (and helping the kids who hadn’t found one yet). 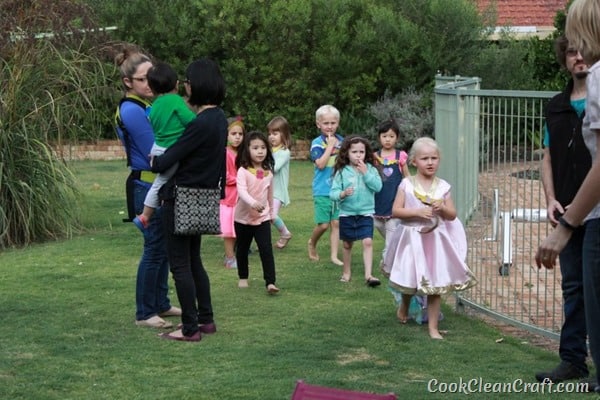 For the next activity, the kids got to pick out a pool noodle My Little Pony: 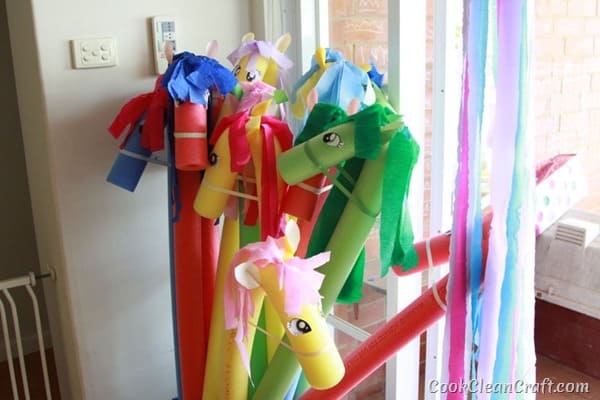 They raced around the backyard with them: 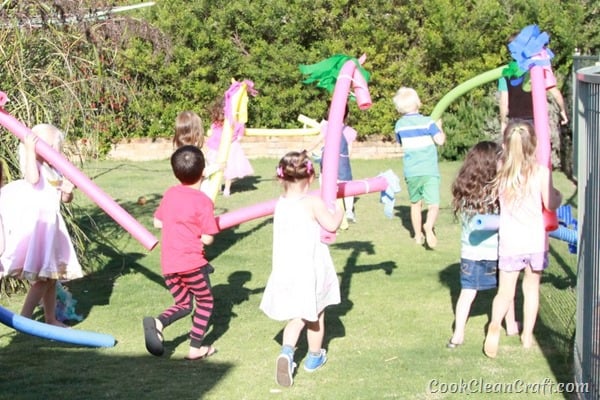 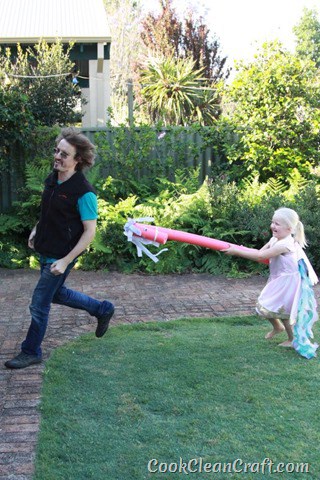 (All birthday parties at our house end with the kids attacking my brother-in-law!)

To end the festivities, I made a Punch Pinata, using the box my daughter’s My Little Pony scooter came in. Most of my prizes didn’t fit in the holes, so I put notes in, such as Pick a Pony (a small My Little Pony figurine), Unicorn Treats (skittles and marshmallows), Alicorn treats (Cadbury Marvellous Creations Rainbow Rockin’ Bears) and Taste the Rainbow (rainbow lollipop). My Little Pony hairclips managed to fit in the slots! 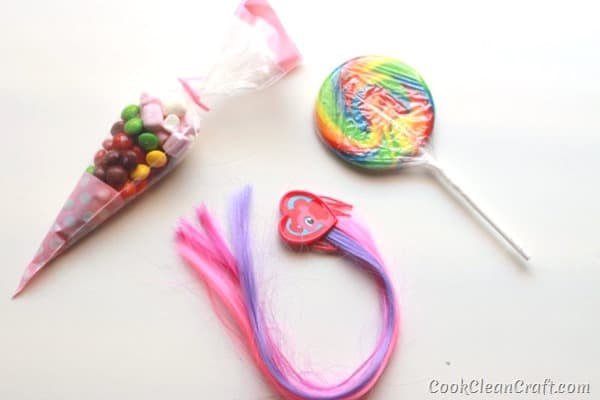 I put the very girly hairclips in the bright pink slots, and the more gender neutral gifts in the blue and silver spots. I wasn’t sure the boys at the party would want hairclips! My sneaky system worked – none of the boys picked pink! 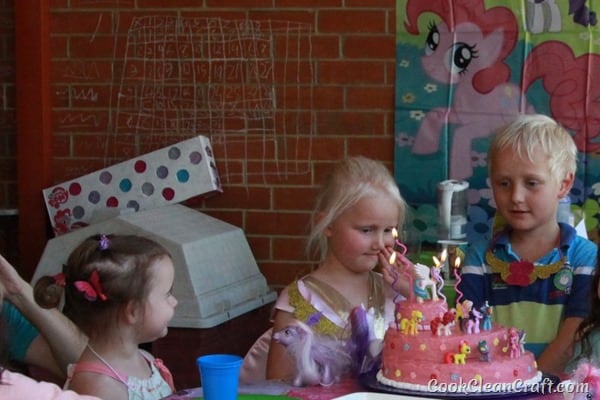 My photographer (ie Mr CookCleanCraft) didn’t manage to take a photo of the punch pinata. The best I have is this one in the background! Ooops!

The kids already received a pool noodle pony, Elements of Harmony necklace and prize from the punch pinata. But kids still love a loot bag, so I put a few extra treats in a bag – a fun-size packet of Skittles, bubble mixture and some My Little Pony stickers. 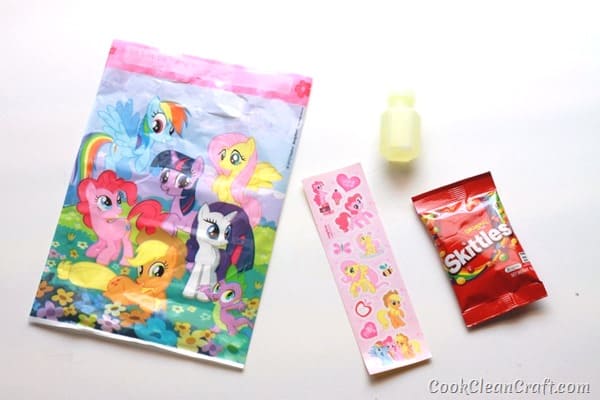 Loaded up with their loot, some very tired and happy kids went home after the Perfect My Little Pony Party (as proclaimed by the Birthday Girl herself!). 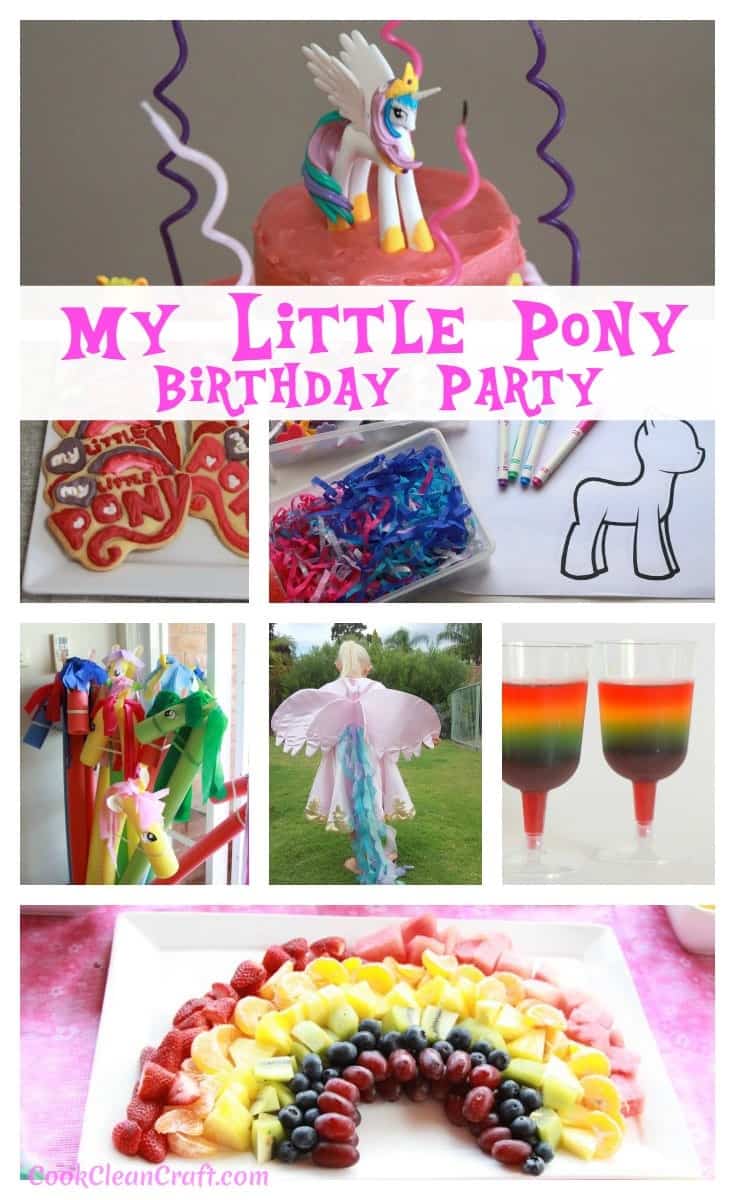 Sign up for the Cook Clean Craft newsletter to stay up-o-date, including links to tutorials for the My Little Pony party.