My clothes tend to be plain and simple, and I like my embellishments to be subtle, but I still like a bit of prettiness. With that in mind, the “Be Still My Ruffled Heart” top first sprung into my mind when the Spring Top Sew-Along was announced at Made By Rae. 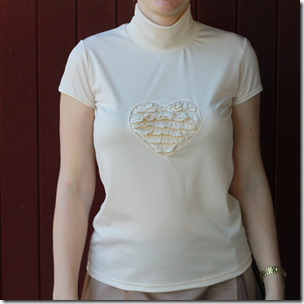 I started with Jalie pattern 2805 (mock turtle neck, capped sleeve variation), but that would be too plain to enter into a competition, so I took my inspiration from this image I’d ripped from a Kmart catalogue (in Australia): 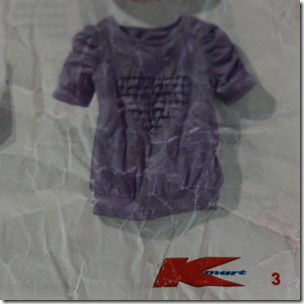 Umm, a little scrunched as I had to save it from a marauding toddler!

Yes, I am modelling my clothes of children’s wear now. I thought it would look nice in a more adult colour, and I’m hoping ruffles are still in fashion!

Since I’m avoiding new fabric purchases, I rummaged around in my stash and found an interlock that I bought at a Spotlight when it was 30% off if you finished a bolt. I love the cream with a hint of peach colour. The pattern called for 4-way stretch, but this was only 2-way, but I thought it was still worth a try!

The heart was made using the same tutorial at Pickup Some Creativity that I used for my pot-holders, but I sewed rows of ruffles onto the inset fabric.I like the pretty detail that it adds to the top. (Does anyone want a tutorial for this?) 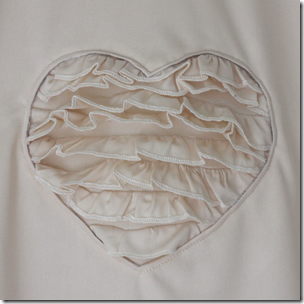 Overall though, I like the idea of the top, but it didn’t turn out quite right. I think the fabric has too much lycra or something in it and it looks pulled and stretched and doesn’t drape nicely. I think the sizing is a little too small for me (although will probably fit nicely when I’m no longer nursing 😉 ), and there is a strange pull/gathering across one side of the neckline – I can’t have been careful enough pinning and sewing it in place. The turtle neckline is also a little too high (but it looks ok folded down). I also wasn’t careful enough sewing the ruffles and they are uneven. 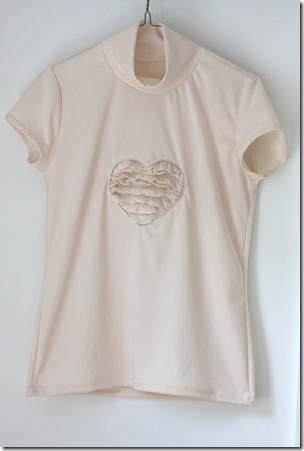 It does look ok when you twirl though: 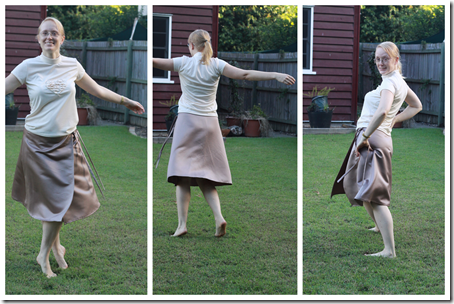 I don’t think Tyra will be discovering me anytime soon!

But enough finding faults – the top is still wearable and I love the concept (just need to work on my execution!). I’m still going to enter it in the Spring Top competition, even if it’s not perfect (Yes, perfectionism – I’m going to overcome you!). 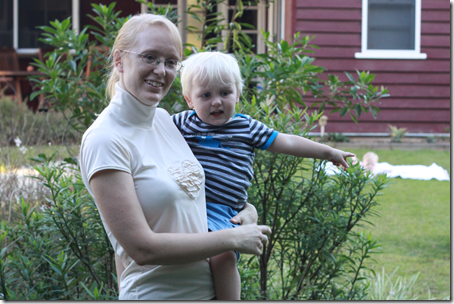 Have you had any not-quite-right projects lately (and did you shed a few tears of frustration, or is that just me)?

P.S. Details of the skirt to come later this month!