It’s been a long time between craft posts. Not really sure why as I’ve got lots of projects to share with you. The memory card on my new camera died, so I lost photos of a few projects. I still haven’t got around to getting a new card, so I’m back using my old point and shoot. I think I lost a bit of enthusiasm for taking photos. That’s enough of the excuses. Let’s see what I’ve been working on…

We moved into our house just over a year ago, and I’m trying to get a few home projects off the to-do list before Bub #2 arrives (54 days to my due date – oh my!). The previous owners’ renovated the house and never got around to window furnishing, so I decided to make my own. I’ve previously posted about the triple-pinch pleat curtains I made for the two kid’s bedrooms, and the London blinds I made for the Master bedroom and guest bedroom. The only “bedroom” left requiring curtains was the study (yes, we have a 5 bedroom house – way too much to clean!).

I really like the look of the London blinds so thought I’d continue on with that theme. I found the fabric at our local Spotlight store and decided it would do the job nicely. Here’s the end result: 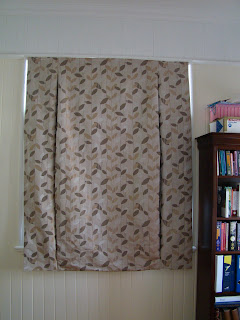 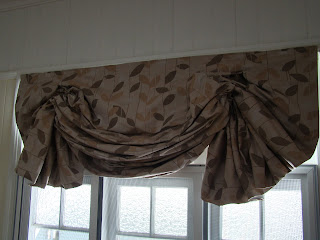 Once again, I used the tutorial for London Blinds at Alternative Windows.

Similar to the Master Bedroom, the study has double doors that open onto a balcony. I made some simple box pleat curtains in the same fabric and attached them with stick-and-sew velcro to cover the windows in these doors. 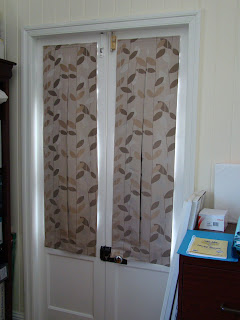 I’m putting together a tutorial on how to sew a box pleat, with an explanation of how I made the curtains. Hopefully it will be ready in the next few days.