This post has been a long time in the making… I made this Puff Quilt Mat (using my own quilt as you go method) for my Mum as a Christmas present in 2011. I really procrastinated writing the tutorial for this. It was a fiddly project and when it was done, I didn’t want to think about it for a while. But finally, here is the tutorial. But firstly, here’s what I’m talking about: 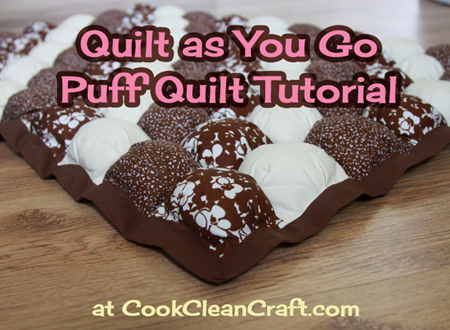 The colours aren’t really my taste, but it looks great in my parent’s bathroom (it’s not for standing on when you’re wet, but to keep your feet off the tiles when you’re standing at the sink – this always confuses my husband!). 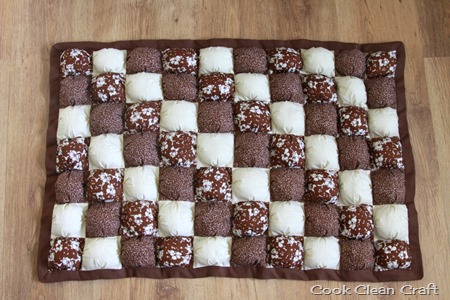 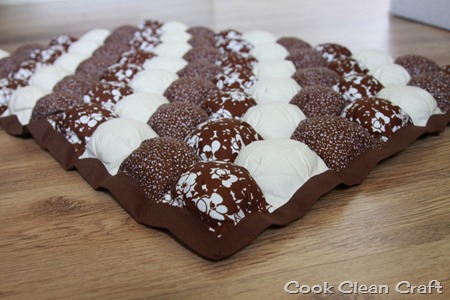 Other puff quilt tutorials make the individual puffs and then sew them all together. A backing fabric is added and the whole quilt is bound. I decided to do things differently, and stuffed my puffs as I sewed to the backing fabric. It saves a layer of fabric (yes, I’m stingy with fabric!) and might be slightly quicker (but it’s still not a quick project!) Click through for the full photo tutorial:

Polyfill or other stuffing 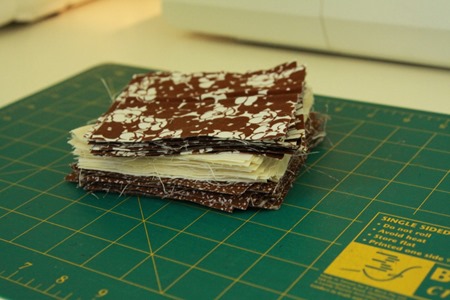 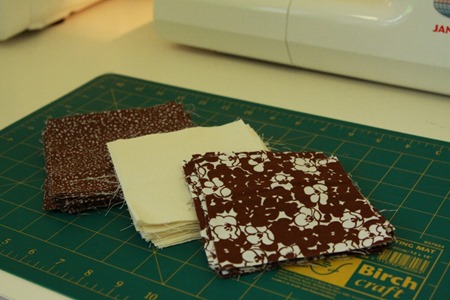 Spread out the squares and play around until you get the layout you like. I went with simple diagonal rows: 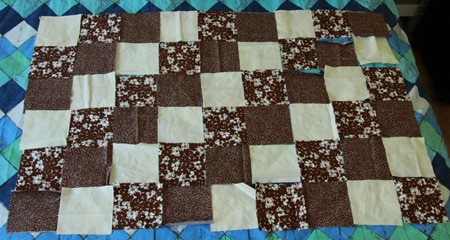 Cut a 1.75” cardboard square to use as a template. Fold a square in half, right sides together. Line up the square on a non-folded corner, and place a pin right next to the cardboard. 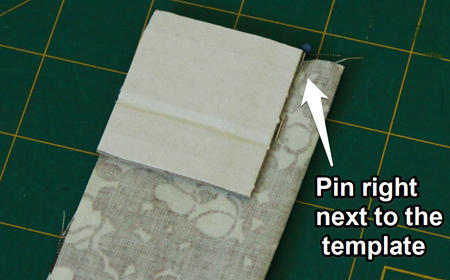 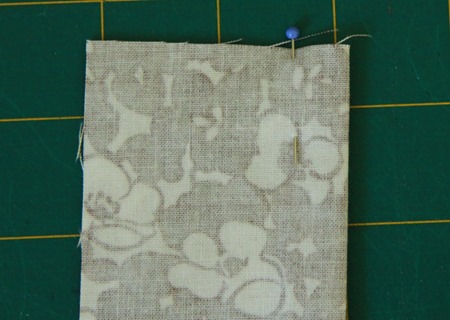 Wriggle the fabric around so that the fold opens up and the centre lines up with the pin to create a small inverted pleat. 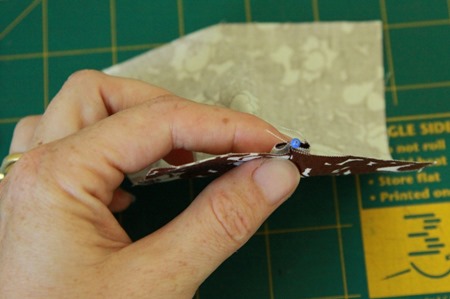 Pin the two sides of the pleat in place and remove the centre pin. 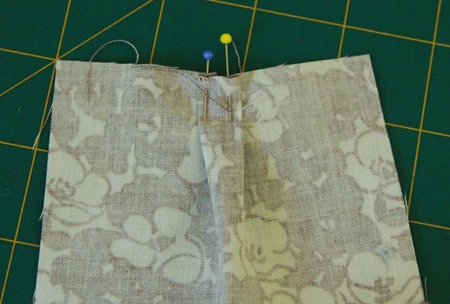 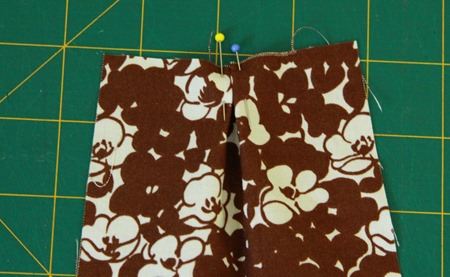 Repeat for the each side of the puff. 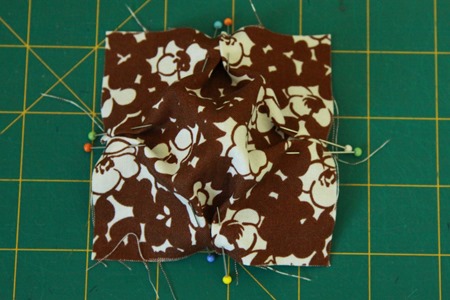 You should now see it starting to puff up (waiting to be stuffed): 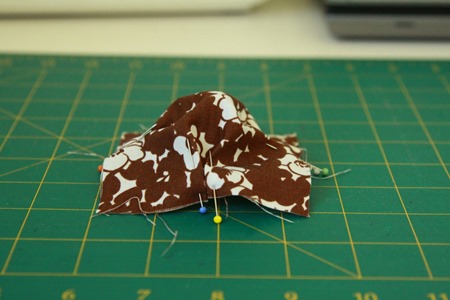 Repeat for the next puff in the row. 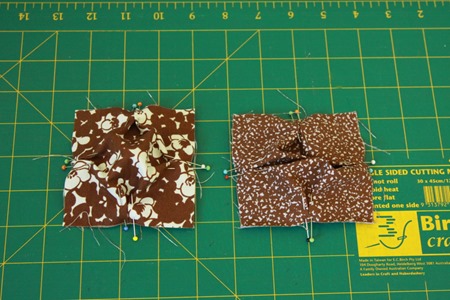 Pin the edge of two puffs together (right sides together), lining up the centre of the box pleat and the two edges. 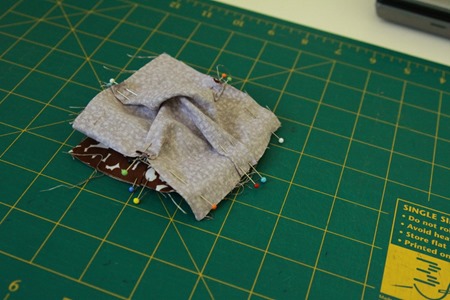 Sew together using a 1/4” seam allowance. 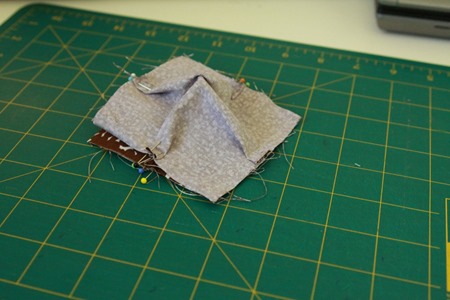 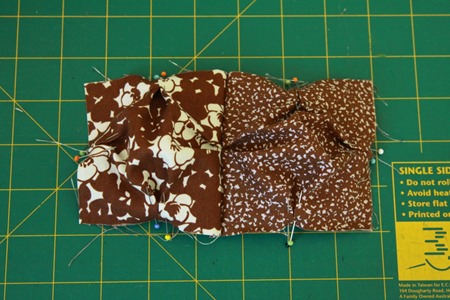 Keep pinning and sewing puffs together for each row of the quilt. 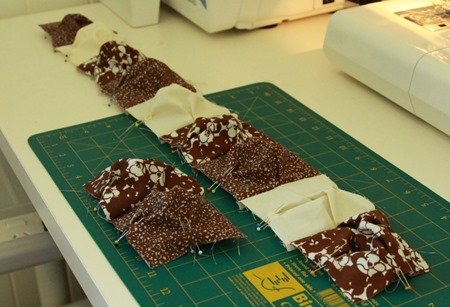 I alternated between pinning and sewing to feel like I was making progress and to break up the monotony of the pinning. I also don’t own that many pins! You could do all the puff pinning first – it’s a good activity for in front of the TV. You’ll end up with rows looking like this (well actually, I’d only pinned some of the side pleats!): 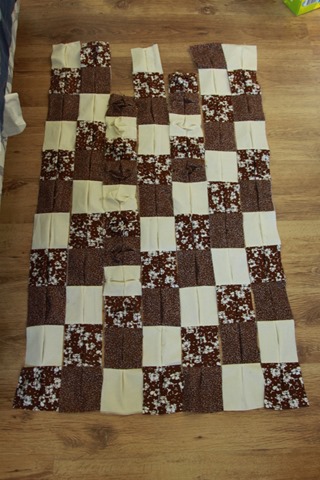 Sew two rows together, lining up the seams as best you can (and they’re not really that noticeable when it’s all puffed if they’re slightly out of whack): 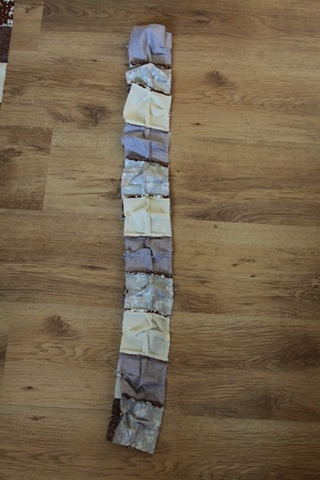 Keep sewing the rows together until you have your puff quilt top: 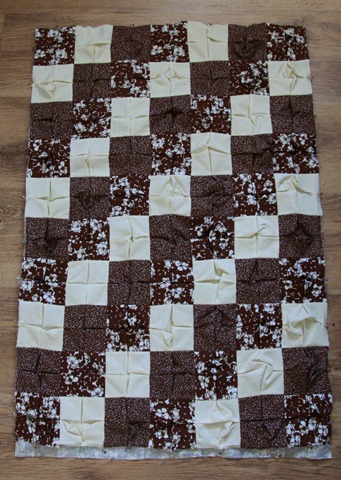 Measure your quilt top and cut the backing piece for the quilt (33” x 21”, it may be slightly different if your seams weren’t exactly 1/4”).

Now for the fun part: quilting and stuffing. First sew two edges of a corner puff. Sew from the top in the ditch of the puff seams (I’ve only shown the back here). 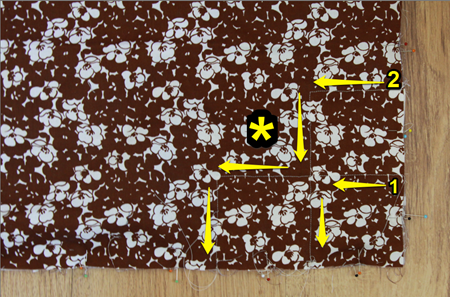 Then sew the next diagonal, which sews together two sides of the next two puffs (marked with 2 in the photo above).

Next, fill the puff marked with a star in the photo above with polyfill. This one will get enclosed with the next row of stitching: 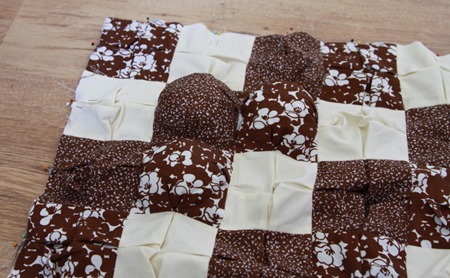 Then sew along the diagonal for the next row (enclosing the stuffed puff): 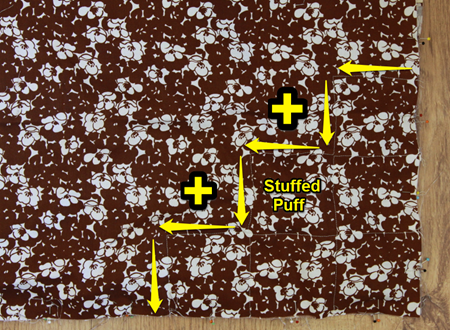 Fill the two puffs marked with a + in the above photo with polyfill, and sew the next diagonal (enclosing those two puffs). Continue on until all the inside puffs are filled and sewn shut (the puffs around the edges are still be filled). Here’s a progress shot: 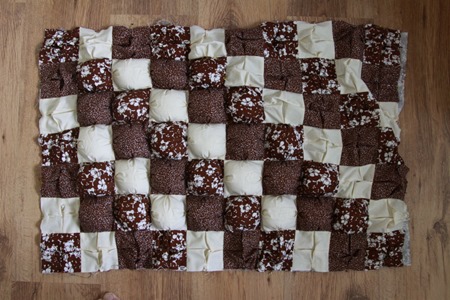 And here it is with all the diagonals sewn (and it’s starting to look like something!): 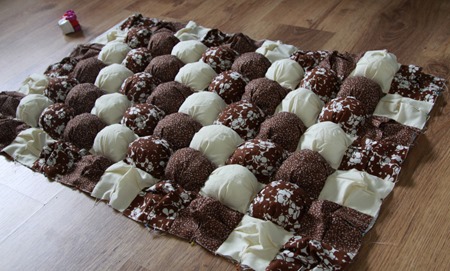 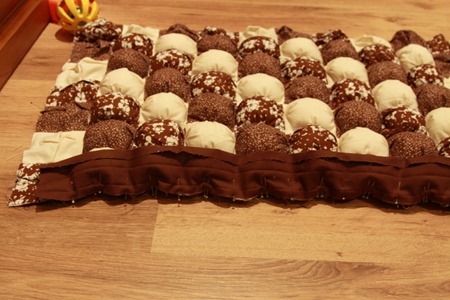 Repeat all the way around the quilt: 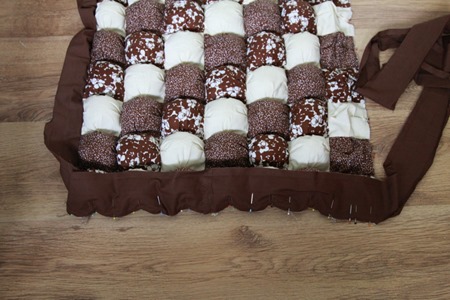 Sew together the two short ends of the bias tape. Sew the bias tap in place along the first crease. Fold the tape over to the wrong side of the quilt (encasing all the raw edges), with the edge tucked under and sew into place. 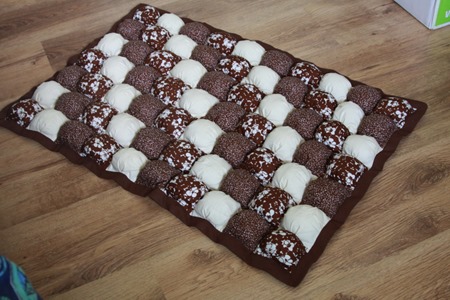 And there you have the finished puff quilt/mat. It’s a slow process, but a snazzy result!

I’d love to see a photo if you make a quilt/mat from this tutorial. If there are any problems with the instructions, let me know too.