With Celebrate the Boy month, my sewing buddy Jenn (carefully matched by Deborah from Whipstitch) and I decided to have a sew-along. We both subscribe to Ottobre Design magazine so we picked the Matisse shirt from the 1/2011 issue (we both have toddler boys so it was easy to agree!). 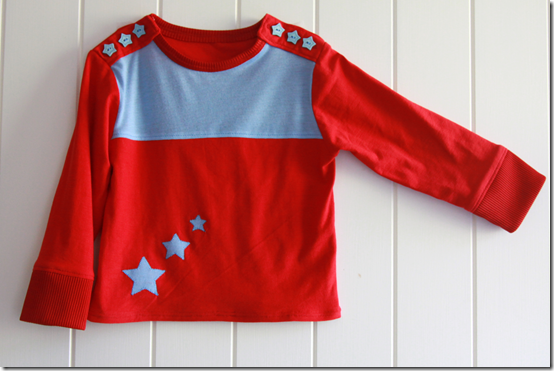 My husband has been making disparaging comments about my fabric stash (and als0 referred to my craft room as Mummy’s Crap Room, but let’s not go there), so I thought this better be a stash-busting project. So after much deliberation (and actually consulting with the hubby as I was so confused!), I picked these red and blue knit fabrics and red ribbing. Rummaging through my button collection, I came across some pale blue star buttons, and the “What a Star” T-shirt was born.
The Ottobre Design instructions are succinct with no pictures of the steps and for me, require a bit of thought. A few times I had to re-read the instructions and double-check before I sewed. I unpicked and re-sewed the plackets as they turned out wonky the first time. The finishing touches of bar-tacks and top-stitching make such a difference in how professional the finished T-shirt looks, so it’s worth the time and effort. 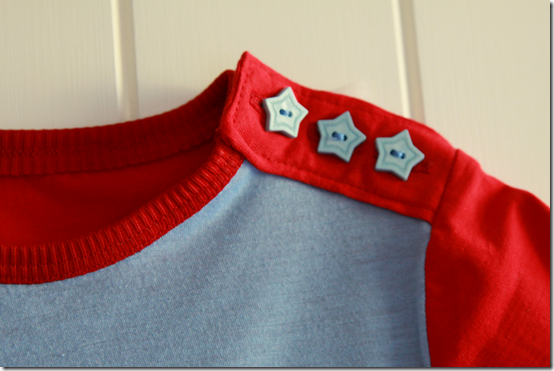 When I found out about the “Let’s Hear It for the Boys” shirt competition at I am Momma Hear Me Roar, I decided the T-shirt needed more style. So I added some appliqued stars (first time sewing a knit applique – it wasn’t as difficult as I expected!), using my sewing machine’s blanket stitch. If you’re thinking I’m just a little crazy doing such a small star design, I think you’d be right. I had to take that one nice and slow (not my usual style at the sewing machine!). 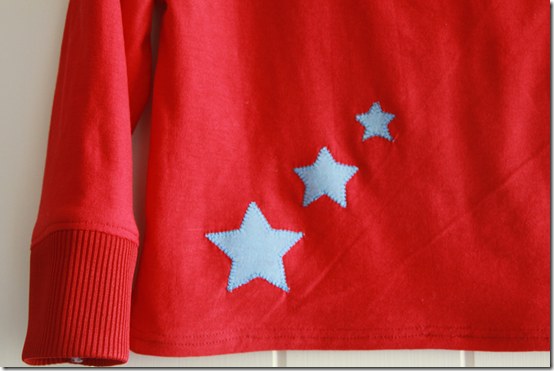 Here are a few photos with my young model (although he was sick and grizzly, so it was tough to get a good shot – I might add a few of the out-takes to the FB page): 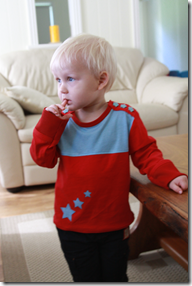 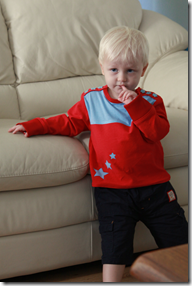 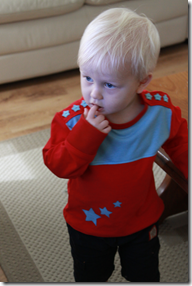 Bathed in the glow of the TV in that last one… No idea why his finger was in his mouth the whole time! It’s on the large side as he’s growing like a weed at the moment, and he won’t need to wear long sleeves for a few months yet.
My husband even said it was my finest piece of sewing to date (although I did have to prompt him 3 times before he said it, but I’m claiming it anyway)!

I’m really looking forward to seeing everyone else’s entries in Let’s Hear It for the Boys – it’s so difficult to come up with ideas for unique boyswear, and it will be great to see lots of inspiration in one place!